Following introductions and presentation of the objective, the interviewer and note-taker site at a level equal to the interviewee.

The facilitator then asks who are the different members of the household – their age, location, relationships (marital status, etc.). Each is mapped onto flipchart paper. 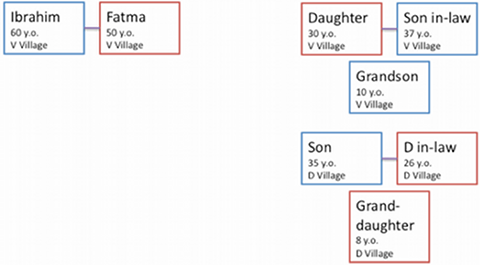 Starting with the interviewee, the facilitator asks about his or her income generating and agricultural activities. The facilitator should probe into how much land they own, cultivate, what crops, inputs used, and other livelihood activities. Each is drawn on the flipchart.

If there is clearly a food deficit in the analysis, ask how do households make up for the shortage? Are there other income earning activities or protection mechanisms within the network or community?
Beyond the interviewee him/her-self, probe into: 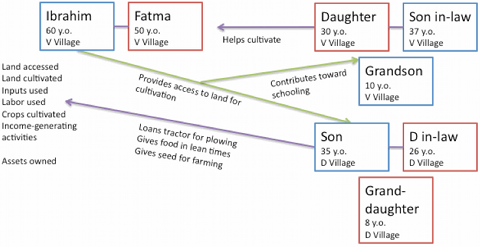 Through interviews, facilitators met with kin elders to construct a genealogy of the kin.
Facilitators first asked kin elders:

Similar to above, once the genealogy is mapped, teams probe into how the kin group operates in terms of how members support one another politically, economically and socially. In probing, be sure to understand the roles of both men and women across the geneology, and relationships among women, men and between women and men.